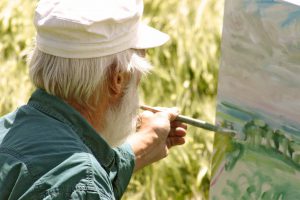 When preparing a few things to say for a talk recently, I realised that writers need to be able to switch from reviewing an overall document to checking its micro details – and to be good at both.

Then I realised it was a quality also needed by painters … and then I realised there are a few other parallels between writers and painters, such as being willing to experiment, having perseverance, etc.  And THEN … guess what; I picked up a book that pointed out many of these exact things …

The book was Think Like an Artist, by Will Gompertz.  I have summarised his ideas here, with additions from my writer’s perspective.

There no such thing as a unique idea, but there are unique combinations of ideas.  Artists train by copying the great masters, and they adapt and steal good ideas that inspire them from elsewhere.  The same is true of journalism: there is no such thing as a new story; there are just new journalists.

An exercise I give to delegates sometimes is to read the first lines of some famous novels – and then write their own first line, copying the novel’s format.  For example: ‘It is a truth universally acknowledged, that a single man in possession of a good fortune, must be in want of a wife.’ (Suspense until the last word of the sentence in Jane Austen’s Pride and Prejudice.)  What can you think of in the same vein?

All artists feel nervous and vulnerable when taking their work beyond their studio … and many writers defer and avoid sharing their drafts with others for the same reasons.  Artists may look confident, but often they are never quite sure about the quality of their work.  There is always a nagging doubt in the back of their mind, says Gompertz.

It is the same for writers.  Some things will work, some things won’t.  Be sceptical; but also be willing to try.

As a writer, you who have to be able to get the detail right (spelling, grammar etc.), but also have an eye on your big picture, i.e. the overall document (e.g. the flow, balance of content and tone of voice).  The same is true of the art world.  Take the conservator, who has to work centimetre by centimetre on restoration, while at the same time having an eye on that little bit’s relationship with the overall painting.

Have a point of view

Journalists often talk about having an angle – a new approach or something interesting to say.  However, having to have something original to say can be a big obstacle.  And if you don’t earn your living by creating things day-in and day-out, it’s no wonder that some of us encounter Writer’s Block.

The solution?  Here are some useful ideas from the author Hilary Mantel:  “If you get stuck, get away from your desk. Take a walk, take a bath, go to sleep, make a pie, draw, listen to ­music, meditate, exercise; whatever you do, don’t just sit there scowling at the problem. Open a gap for your words, create a space. Be patient.”

An artist needs boldness to express their feelings in public, especially to a potentially hostile audience.  Boldness is also required by writers to release their ideas – when coming up with a new style of writing, a new format, or just a more original way of saying things.

The status quo is not fixed.  Be brave.  Just do it.

When you have finished writing, you need to change from being a creator of art into a critic.  For the latter you need to evaluate your efforts. You need to be hypersensitive to mistakes and ways to improve.  And to give time to pause for reflection and revision.

Everyone knows the story of how the English artist J.M.W. Turner added a blob of paint to his painting after he saw it alongside – and therefore likely to be judged against – a work by his rival, Constable.  (The incident happened in the Royal Academy, in 1832.)

My final lesson:  spend as much time thinking (or editing) as doing (writing).

QUIZ for writers – 9 Key questions for your wrting

(This blog has drawn on some of the ideas in the book Think Like an Artist, by Will Gompertz)